A national dish protected by law 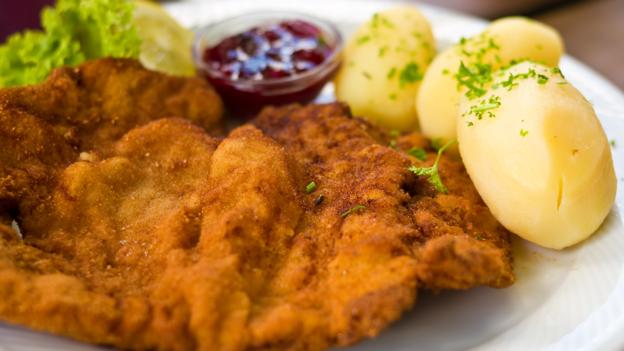 It’s 11:15 on Bäckerstrasse street in the heart of Vienna’s First District, and a queue has already formed outside Figlmüller. The restaurant doesn’t open for another 15 minutes, and although the potatoes were sliced hours ago, there’s still plenty to prepare. Inside, head chef Markus Brunner surveys the tools of his trade: neatly prepared bins of egg, flour and breadcrumbs; two long forks with wooden handles; and three pans of oil heating at Figlmüller’s secret temperatures.

Brunner takes the forks and moves the giant, round cutlet from pan to pan as it sizzles violently in the hot oil. It emerges from the third pan curled and golden to meet a wedge of lemon waiting on the plate. Hearty, simple and steeped in tradition, this tender, stick-to-your-ribs slice of meat has become the epitome of Viennese cuisine.

The Wiener schnitzel (literally: ‘Viennese schnitzel’) is as emblematic of the Austrian capital as Baroque palaces and classical composers. Any restaurant worth its breadcrumbs here features the pan-fried veal cutlet alongside sweet and vinegary Austrian potato salad, or even French fries. But schnitzel culture goes beyond the table: local Viennese groups have organised festivals to celebrate schnitzel, arguably Austria’s most prominent national dish. The 9 September is designated National Wiener Schnitzel Day, and there’s even an online Schnitzel Museum dedicated to promoting, as it proclaims, the “Austrian cultural property” and showing “how much Wiener schnitzel [has] shaped Austrian culture.”

But where did Vienna’s namesake dish come from? The best-known legend is that a gourmand Austrian general discovered the Italian dish cotoletta alla milanese (‘Milanese veal cutlet’) during a battle in the late 19th Century. Back in Vienna, he ordered his cooks to whip up their own version, and the Wiener schnitzel was born.

Yet, historians and chefs note that the first known mention of a breaded schnitzel appears a century earlier in a cookbook of Austrian specialties, and other crumbed meats were popular in the country long before. ‘Wiener’ was a relatively late addition to the name, first appearing in an 1831 cookbook. The idea of attributing the veal cutlet to Vienna was part of an early 20th Century movement to bolster the Wiener Kuche (or ‘Viennese kitchen’), and other local specialties that represented the grandeur of Austria at the time. This desire to label and protect certain dishes helped propel the use of the term ‘Wiener schnitzel’ as a way to differentiate the dish from other breaded meats in neighbouring countries.

Werner Sedlacek, director of the Culinary Institute of Vienna, says that what started as a clever use of old bread in centuries past gradually became a trendy way to coat various meats and vegetables. “The Viennese love breaded and fried foods,” he said. “One cannot imagine a menu in Austria without a Wiener schnitzel on it.”

Today, the term ‘Wiener schnitzel’ enjoys protected legal status in Austria and Germany. Under Austrian culinary code, the term may only refer to a slice of veal coated in egg, flour and breadcrumbs that’s then fried. Pork, a popular veal substitute, must be labelled as ‘Wiener schnitzel vom Schwein’ (‘from pork’), or just as ‘schnitzel’. And while dozens of restaurants have been serving Vienna’s signature, spill-over-the-plate dish for decades, Figlmüller claims to be the home of ‘the one true Wiener schnitzel’.

“It’s made with love,” Brunner said. “On this street here, every restaurant sells schnitzel, but the people come to Figlmüller.”

For thousands of visitors to Vienna, waiting outside Figlmüller is no hardship if it means getting the real-deal schnitzel experience: light and fluffy, never greasy and served by a waiter in a black tuxedo. The Figlmüller name means precision and predictability. But because the Wiener schnitzel’s ingredients and preparation are defined by law, with every restaurant in the city using eggs, flour and breadcrumbs with a dash of salt, Brunner admits that making a stand-out schnitzel can be difficult.

While many serve a big schnitzel, Brunner noted that it’s the details that separate Figlmüller from the competition. The restaurant only uses locally sourced Austrian meat and fresh breadcrumbs. But the real magic is in the frying.

“For the Figlmüller schnitzel, we fry in three pans filled with sunflower seed oil. The temperatures are secret,” Brunner said. “You can fry in one pan, but we use in three pans. It makes the schnitzel very crispy”

To retain the meat’s moisture, the pork cutlet, called ‘Figlmüller schnitzel’ here, is cut to order, and pounded to exactly 4mm thin and 30cm in diameter. The Wiener schnitzel veal cutlet gets much the same treatment, but instead of oil, it gets a quick fry in a pan of molten butter to add more flavour to its leaner cut after it’s breaded.

“We cut it and tender it [right as it’s ordered] because we need the moisture from the meat to make a soufflé between the meat and the breading,” Brunner explained, noting that other restaurants cut, pound and bread their schnitzels in the morning, which makes them less juicy.

The Figlmüller and Weiner schnitzel’s signature colour and crunch come courtesy of another local specialty: Viennese Kaiser rolls, which are baked, dried and grated weekly by Figlmüller’s dedicated breadcrumb maker.

Schnitzel has been a part of the Figlmüller story from the beginning, but it wasn’t always the star of the show. In 1905, Johann Figlmüller opened a modest wine bar a few streets back from the city’s central St Stephen’s Cathedral. It wasn’t until the 1980s that the oversized schnitzel started to attract international attention.

“As our schnitzel became famous, it defined the uniqueness of the dish in terms of preparation and appearance,” recalled 76-year-old Hans Figlmüller Sr, who took over the family business in the early 1960s and whose two sons now own the restaurant.

After articles in the American press sent diners flocking to Figlmüller, other central Viennese restaurants began to add the dish to their menus. In the past decade, Figlmüller said he’s noticed a “schnitzel renaissance”, fuelled by an increase in tourism to Vienna. But even as other restaurants are capitalising on the schnitzel’s recent trendiness, Figlmüller remains a symbol of authenticity.

Now in the fourth generation of family ownership, the original Figlmüller location tucked in the narrow Wollzeile alley still only serves house wine and water to drink – just as it has since 1905. When the restaurant’s benches and nooks fill a few minutes after opening, guests are directed around the corner to Bäckerstrasse, a second location that opened in 2001, where dessert, beer and schnapps are served.

“Austrians like Figlmüller, too,” Brunner said of the holidaymakers lingering outside the door. “They just don’t like to wait.”

Many locals who want a plate-sized schnitzel but are short on time head to Schnitzelwirt, a cosy tavern owned by Magdelena Zeiner and her sister in Vienna’s young and trendy Neubau neighbourhood. Though the second-generation, family-run restaurant claims to serve ‘the biggest and best’ Wiener schnitzel in the city, Zeiner doesn’t necessarily agree with the dish’s strict definition and serves 11 varieties.

“They say Wiener schnitzel is veal, but I say it’s really pork. People earlier didn’t have so much money and veal was too expensive,” Zeiner said. “We are famous for big and cheap schnitzel. And veal you cannot make big and cheap.”

Like Figlmüller, Zeiner has also noticed a renewed interest in schnitzel throughout the city. She says the past few years have been especially busy, with an influx of international visitors clamouring for a taste of Vienna’s iconic dish.

Near Vienna’s Schönbrunn Palace, Café Dommayer’s waiters in black tuxedos are a nod to Figlmüller’s upscale feel. The stately chandelier-clad Viennese cafe is best known for its cakes, confections and the spot where Johann Strauss’ orchestra got its start, but thanks to the growing reputation of the city’s namesake dish, its kitchen is busy cooking up a lot of Wiener schnitzels these days.

Yet, among ever-increasing competition and emulation, Figlmüller remains the golden standard of what a Weiner schnitzel should be – a cutlet so quintessentially classic and emblematic of the city that German publication Deutsche Welle recently called it ‘Vienna’s go-to address for schnitzel’.

By 11:30, back at Figlmüller’s Bäckerstrasse location, the house manager is pointing diners towards the dark wooden booths of the traditional Austrian beisl, or tavern. An American couple pours over the menu, settling for a fall-off-the-plate Figlmüller schnitzel and a side of sweet Viennese potato salad – a classic pairing.

Brunner emerges from the kitchen and looks across the room to observe hungry families still filing in the door. “Before Figlmüller, I had never worked at a restaurant where people lined up outside every day,” he said. “It’s a really special feeling.”