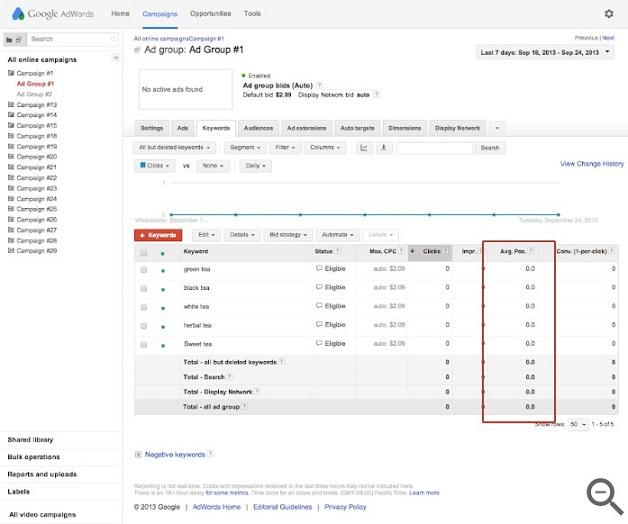 In early 2019, Google Ads announced that it will be sunsetting the average position metric  later this year. At the same time, they launched four new metrics that advertisers could use in its place.

Now, we know that average position will stop being supported in late September 2019. (The most recent target date we have from Google is September 30, 2019.) That date is getting closer—which means you need to make sure you’re ready for the official sunsetting of average position. Here, we’re going to tell you everything you need to know to prepare, including:

Why is average position going away?

Since Google moved away from the “one SERP fits all” strategy in early 2016, average position stopped being an indicator of where on the page your ad is displayed. Consider the screenshots below. Both of these ads are considered to be in position four on the SERP:

One of these ads will likely have better performance than the other.

Instead of telling you where on the page your ad appeared, average position has evolved into a proxy for ad rank. For example, if your average position is 3.1, you can infer that most of the time, two other ads had beaten you in the auction. But you still haveno idea how often your ad is showing above the organic results.

This presents a problem because ads that appear above the organic results tend to perform better than those that don’t. Without the ability to tell how often your ad appears on top, it becomes much more difficult to answer questions like Will increasing bids improve my click through rate? Or Can I decrease my bids without losing out on performance?

In order to answer these questions (and others), Google created four new metrics.

What are the new metrics?

With those new terms in mind, here are the new metrics:

These new metrics provide valuable insight for advertisers—but only if they know how to use them.

Bottom line: We still think advertisers should focus on metrics that will help them achieve their true business objectives.

Remember, change is the only constant