The city that made pasta famous 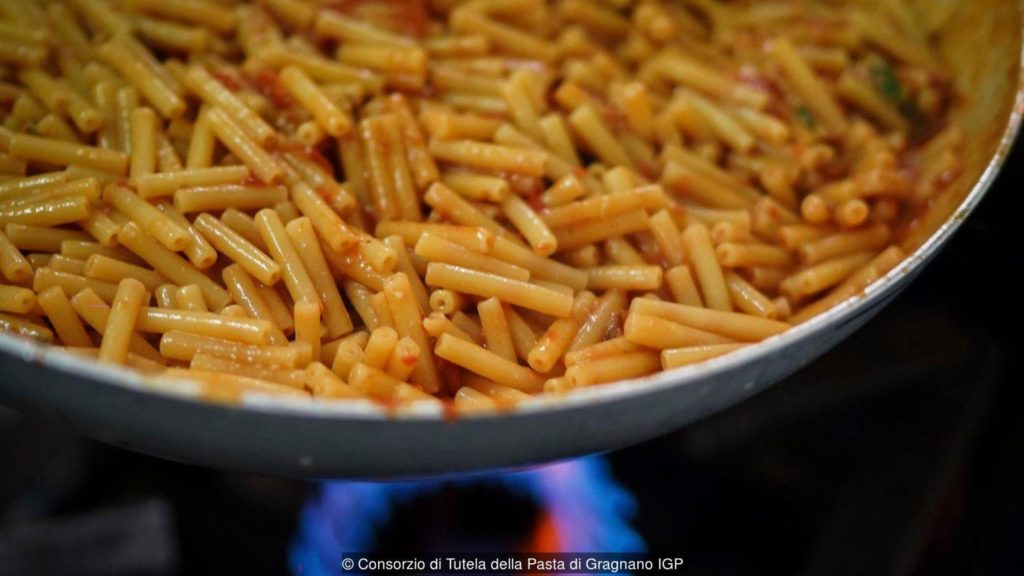 Known as the ‘Città della Pasta’ (City of Pasta), the sleepy coastal town of Gragnano in Italy’s Campania region became famous in the late 1700s for its ‘white gold’, or macaroni.

As a sea breeze blew in from the Gulf of Naples, small, gold-coloured dust-devils slowly sprouted along the factory rooftop, spiralling their way east toward Mount Vesuvius with the precision of ballerinas pirouetting across a stage floor.

In Gragnano, a town of 29,000 inhabitants located 30km south-east of Naples in Italy’s Campania region, the wind strikes like a bell toll, rhythmically throughout the day. Residents initially thought the breeze was ‘Le Mistral’, a cool, dry wind that blows through Provence into the Mediterranean. They were half right. While the north-westerly wind goes by the same name – and is just as defining a feature in southern Italy as southern France – this Mistral (or Marino, as locals call it) blows the opposite way, bringing humidity and minerals from the sea into the streets of Gragnano.

“You could produce and dry pasta every day because of the predictability of this wind blowing inside the village into the valley,” said Giuseppe Di Martino, CEO and third-generation pastaio, or pasta maker, at Pastificio Di Martino, one of three major pasta factories in Gragnano.

Known as the ‘Città della Pasta’ (City of Pasta), Gragnano became famous for its ‘white gold’, or macaroni, when it switched from primarily making silk in the late 1700s when silkworms suddenly started dying of a pest invasion.

The city’s dried pasta-making tradition dates back much further, though, according to professor and historian Giuseppe Di Massa, president of the Centro di Cultura e Storia di Gragnano e Monti Lattari Alfonso Maria Di Nola (Centre for Culture and History of Gragnano and the Lattari Mountains), who cites documents dating to the 1200s that speak of the production of seccata, or dried pasta. Around this same time, the personal doctor of King William II of Sicily, Giovanni Ferrario, who was also a professor at a medical school in Salerno, Italy, proclaimed the benefits of Gragnano’s dry pasta, advising patients with typhoid fever to eat al dente vermiculos, the predecessor to vermicelli, a long pasta slightly thicker than spaghetti.

Fresh pasta, a simple blend of wheat flour and water bound together by eggs, is more common in the regions of Piedmont, Lombardy and Veneto, where the dough is pressed through rollers to form tagliatelle or tortellini. Dry pasta, meanwhile, only requires two ingredients: water and durum wheat semolina, which is extruded through traditional bronze dies that provide a coarse texture to the final product, giving the pasta the capacity to soak up more sauce.

“Here, in Gragnano, we are much more addicted to dry pasta,” explained Nunzia Riccio, food technologist and quality control manager at Pastificio Di Martino, as we toured the factory.

From the 360-degree vantage point on the top of the Pastificio Di Martino building, where semolina dust slips up from the vents forming the dust devils darting across the floor, it’s easy to see how Gragnano is positioned to be a natural pasta-making factory. The city is encased by mountains on three sides and the sea on the other, creating a rain shadow effect ideal for drying pasta slowly in the street over days as marine breezes blow in from the coast. The buildings are staggered in a way so that the moist wind, which blows in several times a day, provides natural ventilation by forming a tunnel along the town’s ancient main thoroughfare, Via Roma, where the majority of factories were built. If it wasn’t for the faint semolina powder rising into the air, you wouldn’t guess this sleepy coastal town was once one of the richest in the region in terms of pasta production.

“In the past, almost every family in Gragnano produced pasta,” Riccio said. “This has been an ancient tradition for over 250 years, with ‘white gold’ serving as the economy of the city.”

In the 19th Century, Gragnano was one of the famous stopovers on the Grand Tour, when wealthy Europeans would complete their cultural education with a trip to study Europe’s ancient civilisations in Greece and Italy, checking off sites like the Parthenon and Pompeii the same way a college backpacker does today. “When European nobles came to Gragnano, in order to prove they had done part of the Grand Tour, they would bring pasta back to say they’ve been to Gragnano,” Di Martino said.

Tableaux painted by French artists like Prosper Barbot and Jean-Baptiste-Camille Corot (six of which hang in the Louvre in Paris) depict life in Gragnano during the height of its pasta production. Painters arrived with their easels in the Valle dei Mulini (Valley of the Mills), where 40 watermills ground fresh wheat from nearby Puglia with spring water streaming in from the Monti Lattari (the Lattari Mountains); or along the ancient, lava rock-lined Via Roma, where carts waited with crates to transport goods to market. Nearly 70% of Gragnano’s population at that time was involved in the pasta sector, and 100,000kg of pasta were produced each day. When King Ferdinand II of Naples visited the city in the mid-1800s, he was so impressed that he chose Gragnano’s pasta makers as his official suppliers for summer court at Quisisana, the former royal residence outside Castellammare di Stabia, 5km from Gragnano.

By the mid-19th Century, the city’s dry pasta was so popular that the municipality of Gragnano started tearing down old buildings to make way for dozens of family-run factories that dried pasta on river reeds dangling like weeping willow branches outside their front door.

“The municipality allowed pasta factories to occupy the space out front with the spasa (pasta on the reeds), and, playing their part, pasta factories guaranteed the street’s cleanliness, since they didn’t want their pasta to be contaminated by dust,” Di Massa explained. “The way Gragnano pasta was dried was a real art, improved over centuries and passed down as a family secret generation after generation. Since no preservatives or antibacterials existed at that time, the conservation [of pasta] depended upon slow drying.”

Buildings were positioned so they didn’t cast a shadow on neighbours and Via Roma was widened to make it easier for pasta makers to receive raw materials from the Valle dei Mulini, according to Di Martino. Gragnano was redesigned industrially to be ‘the pasta town’, since factories were exporting an enormous amount of pasta to the United States to the Italians who emigrated before the Wall Street Crash of 1929,” he said. “At the time, Gragnano’s pasta was more popular outside of Italy.”

At the beginning of the 1900s, Gragnano counted nearly 120 pasta factories. The industrial boom, however, replaced the traditional method of al-fresco drying with mechanised motions in ventilated rooms, reducing the number of factories to 42. Factories grew in size but not in number. And while they were exporting pasta to new markets, mechanical tools replaced people, driving up unemployment. This was the catalyst that led many labourers to migrate to the US in search of work.

“The economic recovery was slow, and large industrial complexes were born in other parts of Italy, which forced many Gragnano pasta factories to close,” Di Massa said. “The surviving pasta factories rolled up their sleeves and realised that it was not possible to compete with the big pasta companies in terms of production and sales prices, so they all focused on the quality of their pasta.”

When exportation to the US was banned during World War One as part of the government’s plan for economic defence, the Italians in the US who had once imported the ‘white gold’ recreated the slow drying process with the help of machines to produce Italian-style pasta for the American market.

One thing they couldn’t replicate, however, was the taste. The reason Gragnano’s pasta travelled so well – particularly on the six-week trip to the US – was the ingredients. “The water features low levels of minerals that doesn’t modify the flavour and taste of pasta, when compared to other areas,” Riccio explained, and the Italian durum wheat only travels three hours to Gragnano from Puglia, “so the semolina is fresh, and there is no time for mould or toxins to develop”.

A little over a decade ago, Di Martino, the former president of Gragnano’s consortium of pasta makers, Consorzio Gragnano Città della Pasta, was at London’s Borough Market for a conference hosted by the Canadian Wheat Board. “They felt there was no future in biodiversity and local production, and the only way forward was globalisation,” he said. Packages of Canadian wheat could be sold five or six times before landing on England’s shores, which made him reflect on Gragnano’s prime locale near Puglia. On the taxi ride to lunch, he started thinking of ways to preserve Gragnano’s ‘white gold’ with farmers in the fields of Gravina, who supply wheat to the town’s 14 factories – which account for 14% of the dry pasta exported out of Italy. “What I wanted was to have better quality of wheat that was connected to the land, to the people, and preserve this heritage,” he said.

Gragnano’s first emblem was a bundle of wheat, a hand later added clutching the stems like spaghetti, which, according to Di Massa, symbolises the correlation between the earth and manual labour. “When you’re linked to a place, you’re transferring value back to the farmers,” Di Martino said in his opening speech at the 10th anniversary of the Festa del raccolto, Puglia’s annual pasta harvest festival, in June 2018. “Growing up in Gragnano around the factory, pasta becomes your toys, workers are your friends.”

Wheat here is referred to in vintages, similar to wine, and millers refer to themselves as famers – less mechanical, more terroir-driven. Provenance is more important than packaging in Gragnano, ensuring pasta is produced according to a set of strict regulations (which Di Martino helped draft in 2013 when the pasta was designated a Protected Geographical Indication by the EU) that all pastai must adhere to for their pasta to be considered ‘Pasta di Gragnano’, just as a winemaker follows certain codes in Champagne.

Gragnano’s pasta may now be dried in sealed production lines, but the air blowing on the engines is the same that once dried the strands dangling along the city’s streets. As a way to pay homage to the city’s pasta heritage, Gragnano’s pasta makers still set up stands and cook in the street each September during the Festa della Pasta di Gragnano, a festival that first kicked off after World War Two as a way to revive Gragnano’s traditional pasta production and “act as an awareness tactic, so people knew what was happening behind closed factory doors,” Riccio said.

The city swells to five times its size as 100,000 people stream into town for the two-day event which sells nearly 5,000 plates of pasta per day. Big-name chefs set up live-cooking demos in the centre of town where the pasta historically hung in curtain-like strands along either side of the street.

“I love it, it’s like the whole town turns into a theatre,” Di Martino said, adding that the event is part of what helps keep Gragnano’s reputation as the city of ‘white gold’ alive today. “If you say Parma to an Italian, they’ll think Parmigiano-Reggiano cheese or ham; if you mention Gragnano, they’ll think pasta.”