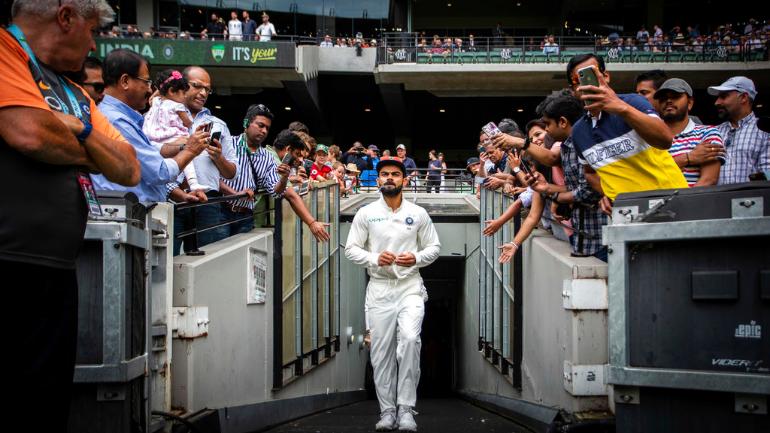 India skipper Virat Kohli scored 76 runs on Day 1 of second Test against West Indies to become only the 4th Asian batsman to score more than 9,000 international runs outside Asia.

With a half-century on opening day of the second Test against West Indies, India skipper Virat Kohli reached another milestone in his cricketing career as he became only the 4th Asian batsman to score more than 9,000 international runs outside the continent.

Tendulkar is leading the list for highest internationals runs from an Asian batsman outside Asia with 12, 616 runs. Dravid has 10, 711 runs and is trailed by Sangakkara with 9593 runs, whereas Kohli has 9056 international runs.

The India captain missed out on his 26th Test hundred but his 76-run knock helped India reach 264 for 5 at Stumps on Day 1 of the ongoing 2nd Test. On a pitch where batsmen had to work hard for their runs, Kohli looked in control, hitting 10 boundaries in his 163-ball 76.

He stitched a 69-run stand with opener Mayank Agarwal for the 3rd wicket and added another 49 with vice-captain Ajinkya Rahane.

Just when Kohli was looking set for another 3-figure score, West Indies captain Jason Holder got the India captain with a nearly unplayable out-swinger post Tea.

Virat Kohli, who has been in an impressive form in the past couple of years, is also bidding to become the most successful India captain in Tests as his team eye a win over West Indies in the ongoing second and final Test in Jamaica.

Kohli had equalled Dhoni’s record when India crushed West Indies by 318 runs in the first Test in Antigua earlier this week.