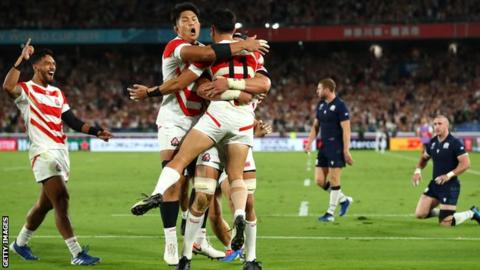 Scottish Rugby has questioned whether a misconduct charge from World Rugby is “appropriate”.

Comments made by chief executive Mark Dodson about the potential cancellation of the World Cup match with Japan have been referred to an independent disputes committee.

Dodson had hinted at legal action, when the match was in doubt because of Typhoon Hagibis.

The game went ahead and Scotland lost 28-21 to exit at the group stage.

A Scottish Rugby spokesperson said: “Scottish Rugby once again expresses its sincere condolences to the people of Japan and all those affected by Typhoon Hagibis which struck last weekend.

“We have been able to convey our best wishes directly to the mayor of Yokohama and the chairman of the Japanese Rugby Union. We stand with the great people of Japan.

“Following receipt of correspondence yesterday from World Rugby, Scottish Rugby confirms that it has received a notice of complaint from Rugby World Cup Ltd. Scottish Rugby is querying whether the matter is an appropriate one for the bringing of misconduct charges.

“If misconduct proceedings are to proceed, Scottish Rugby looks forward to receiving a fair hearing in this matter. No further comment would be appropriate at this time.”