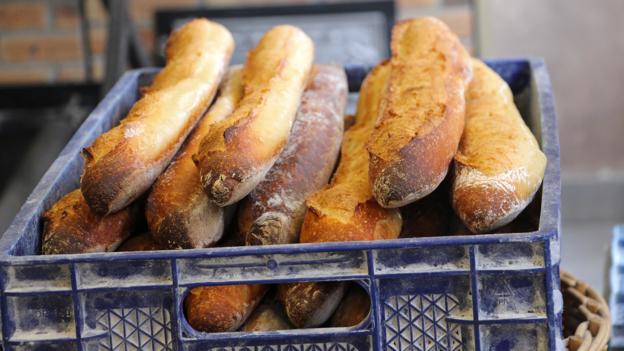 Every year, Paris holds a Grand Prix to crown the city’s best baguette – and in recent years, the winners have been bakers whose ‘origins’ are far from France.

Stroll through Paris first thing in the morning, and you’ll see lines of people snaking out of their local boulangeries for their morning bread. That’s because, throughout France, getting up early and buying a baguette is more than second nature; it’s a way of life. According to the Observatoire du Pain (yes, France has a scientific ‘Bread Observatory’), the French consume 320 baguettes every second – that’s an average of half a baguette per person per day and 10 billion every year.

It’s no surprise, then, that France takes its baguettes seriously. In fact, every April since 1994, a jury of experts has been gathering in Paris for Le Grand Prix de la Baguette: a competition to determine who makes the very best in the city.

In the next round, the 14-member jury – which includes culinary journalists, the previous year’s winner and a few lucky volunteers – analyse the remaining loaves based on five distinct categories: la cuisson (baking), l’aspect (appearance), l’odeur (smell), le goût (taste) and the oh-so-French la mie (crumb). A baguette’s crumb should be tender but not damp; spring back when pressed; and exhibit the large, irregular holes that show it has been allowed to slowly ferment and develop flavour.

Last year’s champion, Mahmoud M’Seddi, was the youngest-ever winner of the annual competition, at age 27. “I was lucky enough to grow up in a bakery,” recounted M’Seddi, as he led me past his irregular, hand-formed loaves at his small Boulangerie M’Seddi Moulins des Prés, in the 13th arrondissement. “I grew up with my parents, as opposed to kids who were in day care or with nannies. I was always in the bakery.”

M’Seddi’s passion for baking is palpable and stems from his father. Originally from Tunisia, M’Seddi’s father arrived in France in the late 1980s while pursuing a degree in electrical engineering. “During his school vacation, he came to Paris to work in a bakery to make some pocket money, and he fell in love [with bread making]. He didn’t finish his studies. Instead, he started working as a baker,“ M’Seddi recounted.

M’Seddi has fond memories of watching his father turn dough into baton-shaped baguettes and working alongside him as a child.

“It was like being a magician,” he recalled. “That’s how I saw myself when I was small, mixing things together. I had so much fun doing it.”

Although his mother warned him against becoming a professional baker because of the gruelling hours and lack of holiday time, M’Seddi decided to join the family business. M’Seddi and his father now run three Parisian bakeries: Boulangerie M’Seddi Moulin des Près, located just south of the picturesque Butte aux Cailles neighbourhood; Boulangerie Maison M’Seddi Tolbiac, a few hundred metres away; and Boulangerie Maison M’Seddi in the 14th arrondissement.

M’Seddi gets up each day at 04:00 to begin preparing the dough for his now-famous loaves, which are made entirely by hand. Fat in shape and lightly caramelised on the outside, they are the epitome of what a truly good Parisian baguette should be.

But he keeps the secrets of his perfect baguette under wraps.

According to 2017 winner Sami Bouattour, baguette perfection is just as elusive as M’Seddi is making it out to be.

“When I was on the jury,” Bouattour said, “it was easy to pick the 10 or 20 baguettes that stood out. But after that, when you’re comparing number three and number eight, the differences are so small.”

For M’Seddi, the magic that makes his baguette stand out from the billions of others consumed in France each year is simple: passion.

“You could have exactly the same recipe,” he said. “And if one person is more passionate than the other, they’ll have a better result. Even if you’ve done exactly the same thing, it won’t be the same. It’s like magic.”

M’Seddi has earned the right to place a large, gold decal in his bakery window advertising his status as a champion of the baguette. But that’s not all. Each year’s winner also has the honour of supplying the president of France with his daily bread – a privilege M’Seddi proudly shared with the public by publishing videos on social media of his early-morning routine toting a basket of fresh baguettes towards the immense Elysée Palace.

Emmanuel Macron is evidently quite passionate about France’s loaf-making legacy: in 2018, the president insisted the French baguette be granted Unesco Intangible Cultural Heritage status. Neapolitan pizza, Croatian gingerbread and flatbread from Central Asia already appear on the Unesco list. But according to Macron, “the baguette is the envy of the whole world”.

But while there are few symbols as quintessentially French as the baguette, its status – and quality – have been uncertain in recent years. Beginning in the 1950s, bakers began looking for shortcuts to make baguettes more quickly: relying on frozen, pre-made dough; and baking baguettes in moulds rather than free form. Instead of the crispy-on-the-outside, tender-on-the-inside loaves that M’Seddi bakes every morning, these pale, doughy baguettes became stale almost the moment they cooled down. By the 1990s, they had become the norm for bakers and Parisians.

“Those bakers at that time were happy,” said Bouattour, as he led me past the fresh loaves at his Arlette & Colette in Paris’ 17th arrondissement. “But it killed our profession.”

In an attempt to save traditional French baguettes from widespread industrialisation, France passed Le Décret Pain (‘The Bread Decree’) in 1993, establishing that, by law, an authentic baguette de tradition must be made by hand, sold in the same place it’s baked and only made with water, wheat flour, yeast and salt. Today, these new ‘traditional baguettes’ make up about half of the baguettes sold in large French cities – and are the specimens judged in the competition that has taken place every year since 1994.

And yet, today, some claim that supermarket bread, far cheaper than loaves purchased at bakeries, is edging artisans out of the marketplace. After all, reports French radio station Europe 1, 1,200 small bakeries in France close every year.

“It’s shameful,” M’Seddi said. “It’s bread. It’s France. You need to buy it in a bakery, where people get up early, where they make it by hand.”

In addition to winning this illustrious competition, Bouattour and M’Seddi have a few other things in common. Both forewent the traditional trade school that many aspiring French bakers enter at age 16. Both have been professional bakers for less than a decade (as has this year’s winner, former engineer Fabrice Leroy). And both are first-generation Frenchmen with what Bouattour euphemistically dubs ‘origins’: family backgrounds from elsewhere – or in their cases, Tunisia.

Evoking one’s ethnic background is taboo in nominally egalitarian France. The government has not collected racial or religious information from its citizens since the 1970s (a policy that stems in no small part from censuses performed during France’s Nazi occupation). But while France’s official political stance is intended to engender equality, its reality of beaches forbidding burkinis and naturalisation offices offering to ‘Frenchify’ new citizens’ names seems to tell those with ‘origins’ one thing: assimilate.

At Arlette & Colette, Bouattour sells a range of breads, pastries and viennoiseries, all made by hand each day and all using certified organic ingredients. “Sometimes we get clients coming in saying, ‘The neighbourhood is full of Tunisians – thank God you guys are here!’” he said, referring to him and his wife, who works alongside him in the bakery. “But we have Tunisian origins too.”

Nevertheless, Le Grand Prix de la Baguette contest does a fairly good job of creating an even playing field for participating bakers, regardless of their backgrounds or experience.

“All the baguettes were numbered, so we had no idea about who we were evaluating,” explained Meg Zimbeck, founder of restaurant review site Paris by Mouth, of her experience as a past jury member. “The biggest potential problem is palate fatigue. We tasted a lot of baguettes.”

Interestingly, before M’Seddi’s victory in 2018, three of the last four years’ winners were also French bakers of African origins.

Djibril Bodian is the baker behind picturesque Montmartre’s Le Grenier à Pain bakery. Also a son of a baker – and a first-generation Frenchman of Senegalese origin – Bodian decided at age 16 to follow in his father’s footsteps. Almost immediately, his bakery school teachers recognised his natural aptitude for the trade.

“The teacher started using me as a good example, saying to the others, ‘Do it like Djibril!’,” he recalled. “It made me feel recognised, but it also put pressure on me. I didn’t want to disappoint him.”

As a rule, the baker who wins the Le Grand Prix de la Baguette competition is not allowed to compete for the following four years. But after earning the title of Paris’ best baguette in 2010, Bodian said, “I had only one desire: to enter again as quickly as possible. So for four years, while people might have thought I was resting on my laurels, I was already working, trying to improve.”

In 2015, Bodian won the contest for a second time.

“It was an immense pleasure and an honour,” he said, laughing. “But when I became a baker 22 years ago, no-one thought that a baguette could bring you to the Elysée Palace.”

Bodian credits his success to both his Senegalese background and values and his French training.

“I stopped thinking of myself as a foreigner a long time ago, but my origins make me the person I am today,” he said. “We all start with the same tools, the same teachers, but some people are going to understand things differently. That has nothing to do with origins; that’s just talent.”

Bodian, Bouattour and M’Seddi’s stories echo those of France’s 2018 World Cup winning team. Since more than half the roster was comprised of players with African heritage, the victory triggered a national debate over French identity and led many of the team’s players to assertively lay claim to their Frenchness. Much like these players, Bodian notes that the Grand Prix’s participants and results represent France as it is today: a diverse and multicultural country made up of people who are proud to be French.

“Whoever wins the contest is a winner,” M’Seddi said. “He’s a champion, whether he’s descended from immigrants or not.”

And while he brushes off the importance of evoking one’s foreign roots, he does admit that there is a certain element of pride when someone of foreign origin takes top prize.

“That’s someone who’s passionate about French culture, who has become integrated as a French person,” he said. “We need to make people proud to be French.”